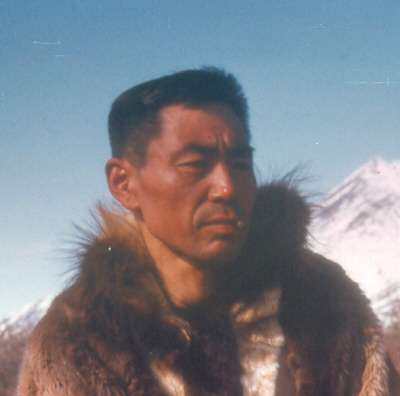 Simon Paneak was born in the spring of 1900 near the Killik River valley of the north central Brooks Range, a mere 15 years after the very first outside explorers reached the area in the winter of 1885. He was the youngest of 6 children raised by his parents Tuÿanna and Kiktuåiaq, to be a Nunamiut hunter, an inland Eskimo, born into the tradition of a highly mobile big game hunting society based upon the taking of caribou.

As a young boy Simon found himself caught up in a torrent of social and historic events that eventually swept his family and his people from their mountain homeland and cast them upon the shores of the Arctic Ocean as refugees from starvation and disease. At the age of 6 or 7 he witnessed the unraveling of an ancient way of life as the caribou herds upon which his people depended failed, bringing repeated years of famine while waves of newly introduced diseases killed many others.

Driven by hunger and the need to seek relief most surviving Nunamiut families moved coastward where they had access to trading posts and, occasionally, jobs. Over the next 20 years and more, while living along the arctic coast Simon grew into an active and robust hunter even learning to read, write and speak English. These were years when people largely supported themselves by trapping, at the height of the Arctic Fur Trapping Industry. With the collapse of this livelihood in the wake of the great depression, Simon, now in his thirties, became part of a movement of highly motivated and traditionally oriented families who determined to return inland to resume their old way of life. It was a return made possible by the recovery of the caribou herds upon which they were dependent. 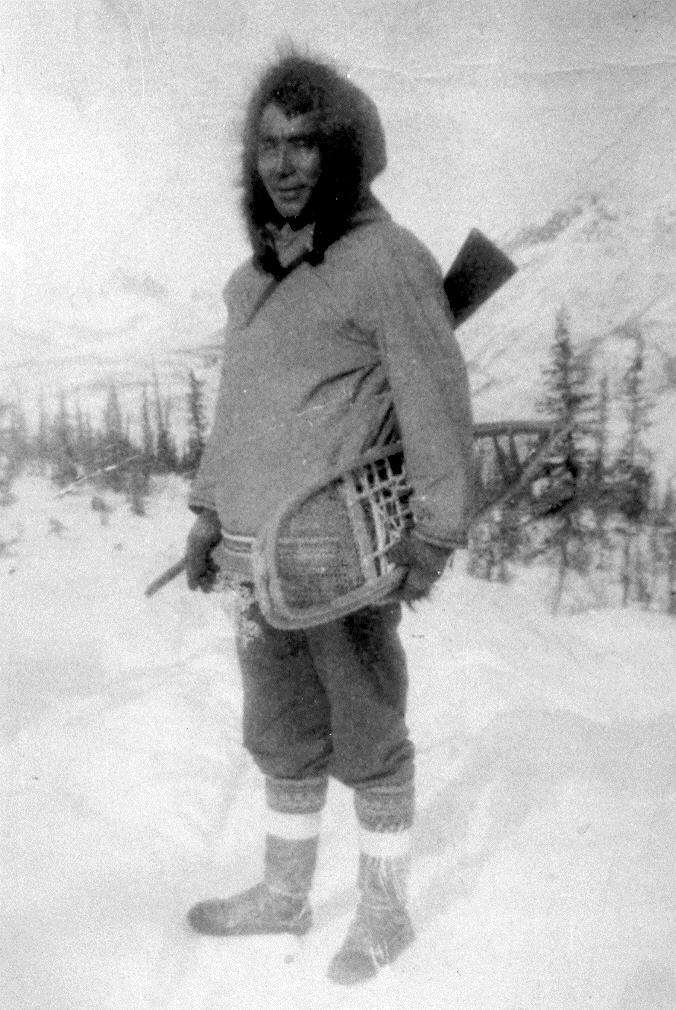 Simon as an active young hunter

1943 saw first air contact with the Nunamiut when pioneer bush pilot Sig Wein encountered several families at Chandler Lake. Over the next few years Wein periodically re-supplied the Nunamiut and was instrumental in convincing the Chandler Lake and Killik River families to relocate to the broad, open Anaktuvuk Valley where he could guarantee regular air service. Once air service was established visiting scientists from many different fields began making their way to the Nunamiut people to study them and to learn from them. It was through his involvement with these researchers that Simon became well known to the outside world.

For nearly the next 30 years he worked with many scientists; botanists, biologists, geologists anthropologists and archaeologists among them who quickly came to recognize that he was a very bright and capable man. Simon’s ability with the English language and his obvious intelligence vaulted him to prominence among the scientific community. So much so that many first rank and prominent scientists such as the noted Arctic Biologist Laurence Irving quickly came to depend upon the experience, insight and judgment of this man. As Irving keenly appreciated, Simon’s knowledge, understanding and mastery of the natural world in which he moved rivaled, if not exceeded, in some respects, that of professional biologists. 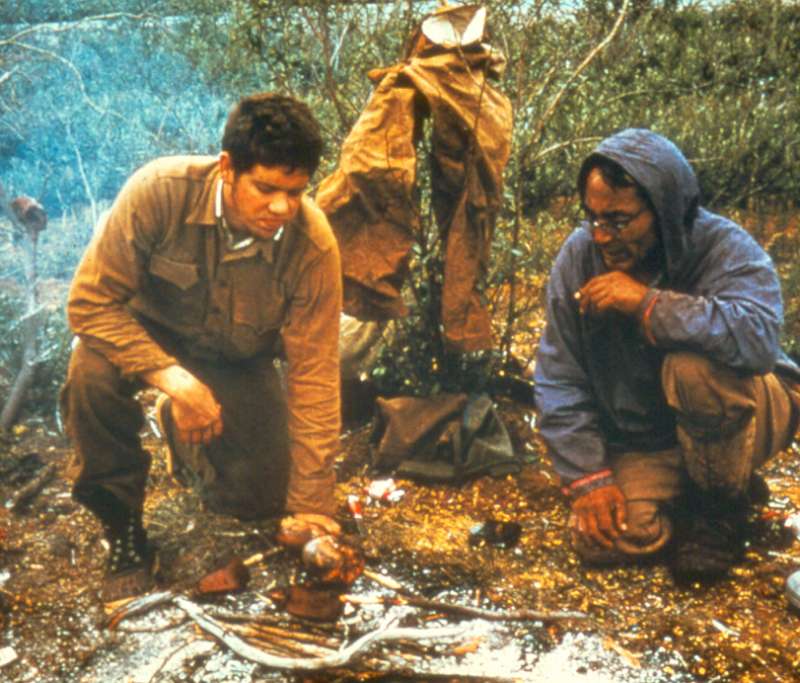 Never the less it bears noting that within his own community, and among his own people, this level of knowledge and competency was, of necessity, commonplace. It was in fact but a portion of what a mature Nunamiut hunter was expected to know and master in order to survive and support his family in the arctic environment. Several other Nunamiut elders, men a generation senior to Simon knew all of this and more, had they been asked, but Simon’s facility with English was key in his attaining prominence.

In addition to the world of nature, Simon was also keenly interested in the history and traditions of his own people. He deliberately and actively sought out knowledgeable elders across northern Alaska to learn from them and in the process became an important source for anthropologists and archaeologists alike who came to work among his people. Interestingly, Simon, who was in the direct line of receipt and succession of these word of mouth stories also represents a transitional figure in the process of rendering them from oral to written history. He was instrumental in passing them along in both forms, orally on tape, which others like author Helge Ingstad and archaeologist Jack Campbell then rendered into written English, but also through his own numerous letters and written journals.

Simon remained a key source of information for many researchers up until his death in 1975, leaving behind a large family who took great pride in their father’s accomplishments as a hunter, trapper, story-teller and historian. 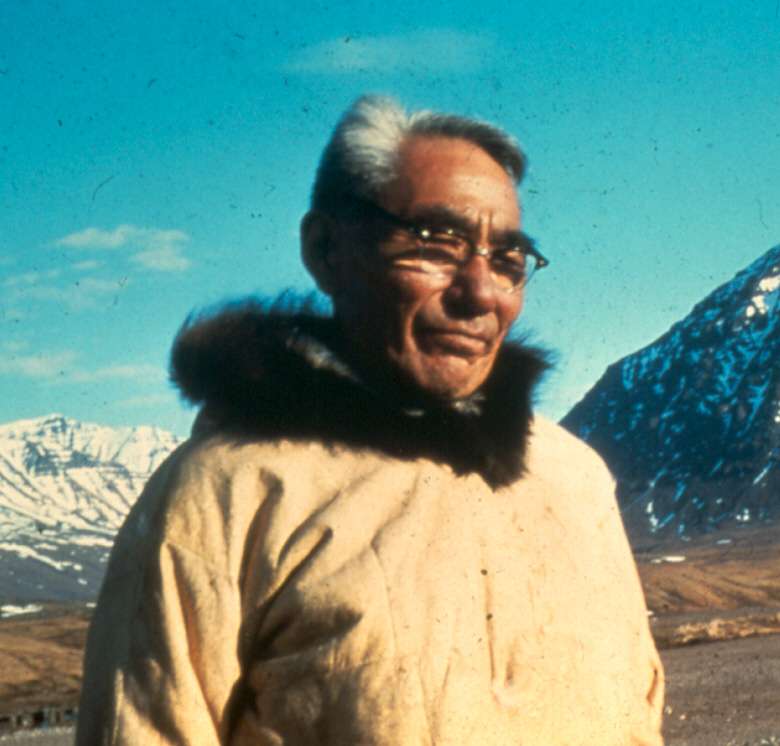 Simon in his later years

In anticipation of the opening of this museum in 1986 the community of Anaktuvuk Pass voted to name the museum after Simon and it has been known as the Simon Paneak Memorial Museum ever since.

As part of a testament to Simon’s importance to researchers we offer this list of publications compiled by the late Laurence Irving which highlight many of Simons accomplishments and contributions to the world of knowledge and science.

Publications in which Simon Paneak was co-author:

A partial list of publications to which Simon Paneak was acknowledged an important source of information: