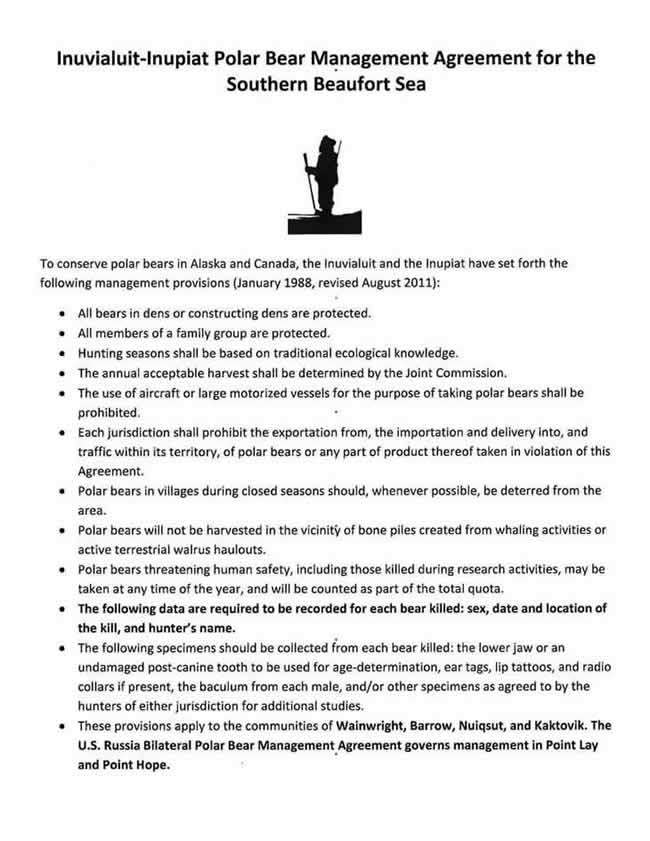 The Inuvialuit-Inupiat Polar Bear Commissioners set a new harvest quota of 70 bears: 35 bears for the U.S. and 35 bears for Canada. The U.S. portion of the quota includes the NSB communities of Wainwright, Barrow, Kaktovik, and Nuiqsut. This was based on a population estimate of 1526 and is considered a maximum sustainable harvest. Go to this site for more information, or this page on the USFWS website. 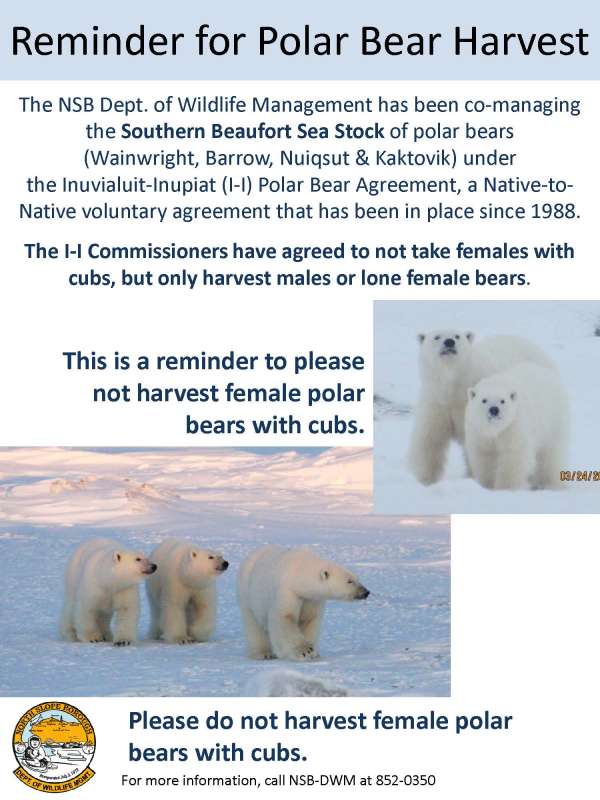 The U.S.-Russia Polar Bear Commission, made up of national and Native representatives from the U.S. and Russia, adopted a combined quota of 58 bears per year, of which no more than 19 can be female. How the quota will be divided and implemented has yet to be decided. The U.S. portion of the quota will include the NSB communities of Point Lay and Point Hope. The four-person U.S.-Russia Polar Bear Commission met for three days in Moscow.

Older reports can be found on the USFWS link above. 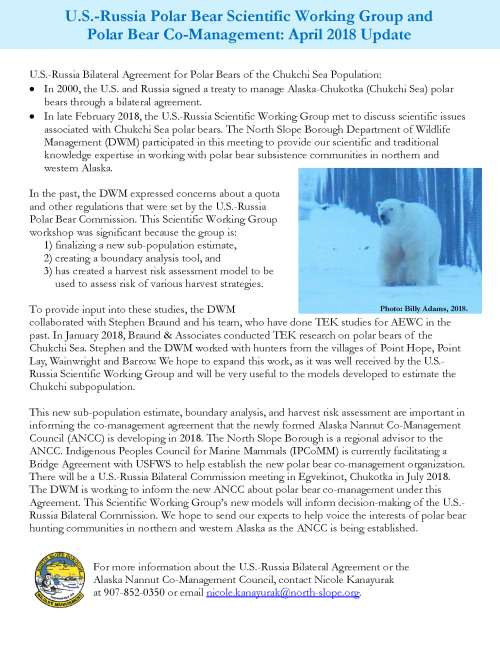 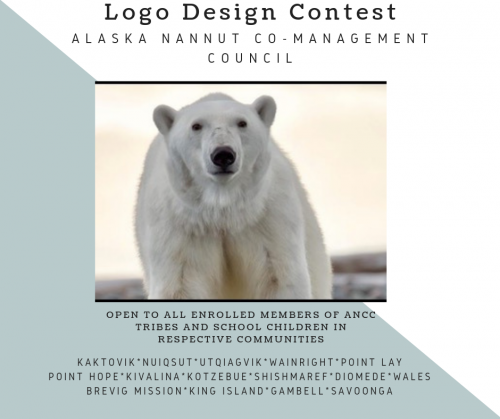 Spring 2011 Research: The USFWS conducts annual polar bear capture efforts in the Chukchi Sea. In the past two years, their helicopter and capture crew were based out of Red Dog mine’s port site just south of Kivalina. They had a fixed wing based in Kotzebue that supported the capture crew and to assist in locating bears for capture. Captures occur mid-March through the end of April.

They work mostly 20-30 miles or more off the Chukchi Sea coastline between Shishmaref and Cape Lisburne. Their staff stay in close contact with whaling captains in Point Hope to determine when whaling has begun and maintain agreed upon no fly zones to avoid any overlap between their activities and subsistence activities by local communities. 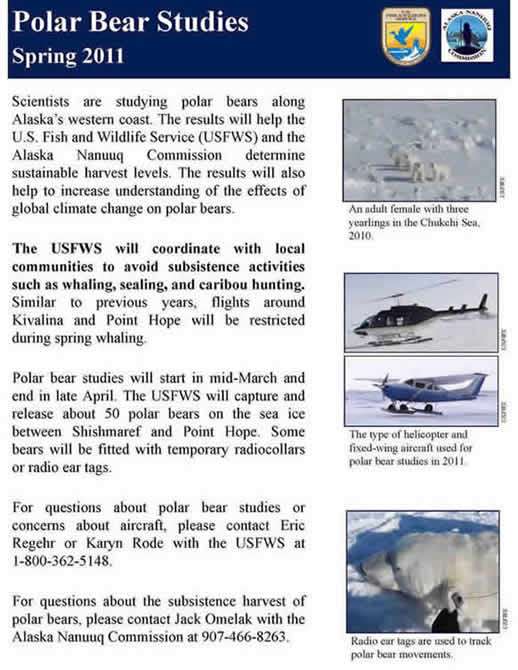 NOTE: The ESA listing and designation of critical habitat does not affect hunters’ ability to take polar bears on the North Slope. 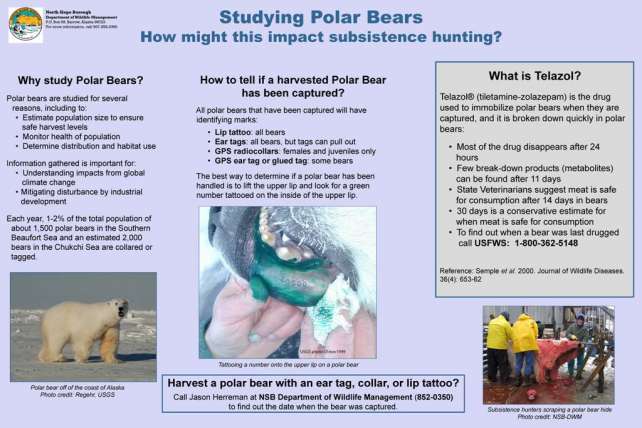 Information on Telazol and its breakdown in Polar Bears:

Harvest a bear with a tag or mark? Call USFWS at 1-800-362-5148 to find out the date when the bear was captured before consuming the meat.

A research study in polar bears* has shown that Telazol® (tiletamine-zolazepam), the drug used to immobilize polar bears, is broken down quickly in polar bears, with the majority of drug residues disappearing from tissues within 24 hours. Some break-down products of telazol (also known as “metabolites”) persist at low levels after this period. These metabolites decline rapidly after immobilization and are unlikely to result in a clinical effect in humans that eat meat or fat from hunted bears, however, some metabolites were found in very low concentrations 11 days post-immobilization (which was when the study ended).

The decision of when to consume meat from a previously captured bear, however, is a personal decision. The USFWS recommends that if you harvest a bear with a number mark on the hide, an
eartag, or tattoo on the upper gums, please call FWS at 1-800-362-5148 to find out the date when the bear was captured before consuming the meat. 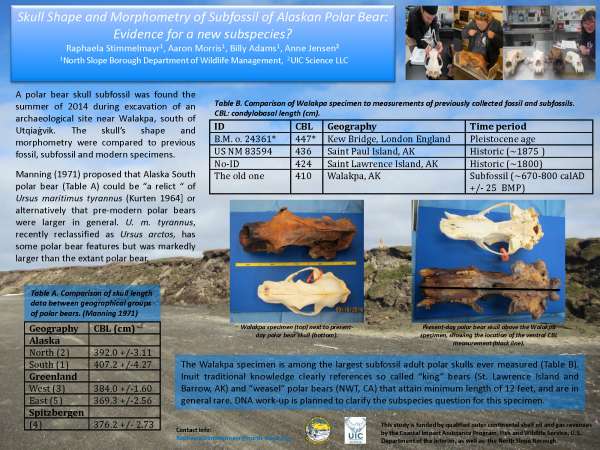 Other Journal Articles on Polar Bears: